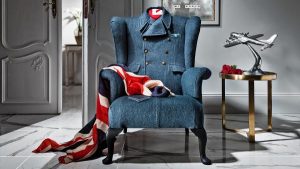 Stop slouching and stand to attention, the latest interiors trend is formal. Forget shabby chic, the smart tailored look is in: flannel, velvet and leather in the autumnal hues popular in gentlemen’s clubs; soft furnishings patterned with herringbone, houndstooth and pinstripe, embellished with overstitching, pleats and studs.

When the models hit the catwalk for the first runway shows of London Fashion Week today, it won’t be only the fashion editors and stylists who are taking notes. Abby Brinton, the head of design at the architectural interior design company Oliver Burns, says: “We go to the fashion shows and take pictures of things that inspire us. I think the line between what is fashion and what is interior design is definitely blurring.”

And, for once, it is menswear fashions that are leading the way. Brinton and her team are adding the finishing touches to the penthouse show apartment at Dukelease’s Beau House development on Jermyn Street in St James’s, central London. The house is named after George (Beau) Brummell, a Regency dandy, whose statue stands on the street famous for its tailors. “Beau Brummell was considered at the cutting edge of fashion,” Brinton says. “We have tried to think, ‘What would the modern-day dandy like today?’ ”

It appears that the modern-day dandy would like cushions that emulate a man’s tailored suit, with a light wool fabric on one side and silk lining on the other, and a bespoke chair with pleating, piping and button details gleaned directly from the catwalk. “We were inspired by Emanuel Ungaro’s beading and pleating,” Brinton says. There are also headboards with detailed stitching and studs, leather-lined display cabinets and a pinstripe rug. Key colours are brown and grey with splashes of burnt orange.

Oliver Burns isn’t the only interior design company that is being inspired by men’s fashion. References to men’s tailoring feature at the new show apartment at Berkeley’s One Tower Bridge development, where the architecture and interior design practice Johnson Ribolla has adopted the theme of British tailoring.

Giacomo Ribolla, a co-founder of Johnson Ribolla, says: “We chose to go for a best-of-British theme to tie in with the iconic historical location of One Tower Bridge. We settled on fashion-inspired interiors because fashion is something Britain does exceptionally well and it can be easily translated into interior design in a way that truly brings it to life.”

Each of the three bedrooms is themed: the master suite is dedicated to Burberry and features the brand’s iconic ivory, beige and grey; the Paul Smith bedroom features a colourful striped headboard; and the Alexander McQueen room displays the fashion house’s exquisite hand-painted silk scarves and sports a lace-motif wallpaper.

Elsewhere there are generic tailoring references, including houndstooth cushions, overstitching detail on the rich brown chairs, studding on leather ottomans and even a charcoal-grey fabric wallcovering called Savile Suiting (by Phillip Jeffries).

There is also a nod to gentlemen’s fashion at British Land’s super-prime Clarges Mayfair development, London W1, where the architect, Squire & Partners, took inspiration from a 17th-century “piccadill” ruff collar for the metalwork design on the balconies.

The lead interior designer for the development, Martin Kemp, the creative director of Martin Kemp Design, says: “The interior detail at Clarges Mayfair draws on the heritage of the area and pays homage to the traditional skills and beautiful craftsmanship of tailoring, watchmaking and expert manufacturing.” This includes a hand-woven carpet that “emulates a pattern as if a tailor has dropped a delicate spool of ribbon on the floor”.

It is not only large-scale developers that have cottoned on to the tailoring trend. Alex Isaac, the head of design at the interior design practice Morpheus London, says: “We recently designed a beautiful penthouse apartment in St John’s Wood, in north London, on behalf of a private client and took inspiration from the world of fashion to create a number of bespoke pieces. These included a studded leather headboard, inspired by a number of designers, including Balenciaga, famed for its beautiful studded handbags. This was extended to pieces of furniture throughout the property, including a bespoke chair in the living room with a studded trim.”

Less subtle perhaps is the eclectic furniture-maker Shaun Brownell, the director of Rhubarb London, who employs a team of tailors and seamstresses to help him to combine antique chairs with uniforms and suits. The exquisitely tailored chairs, which cost from £2,500 to £6,500, are based on a variety of uniforms, including those worn by the Coldstream Guards, Buckingham Palace staff and members of the Royal Air Force, as well as more conventional menswear.

Brownell’s “Dapper Tweed” armchair, for instance, is a 1900s mahogany chair upholstered in a pair of vintage Dunn & Co Harris Tweed houndstooth country jackets. Brownell says: “A client brought in her late father’s uniform and asked me to incorporate it into a chair — it is a piece of furniture with real memories. The effect I try to achieve is a piece with the poise of a seated retired gentlemen, slightly portly, the buttons just so.”

Nordic dome pendant lamp by Out There Interiors £305, furnish.co.uk