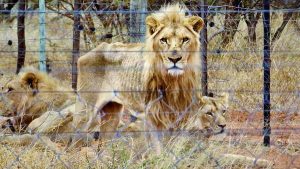 A game farm in South Africa has been raided to rescue emaciated lions that were being bred to be shot by hunters. Officials had received photographs of the starving animals in cages.

The lions were held at a private hunting farm in Alldays, a small town notorious for its so-called driven hunts where shooters fire at animals from the back of trucks.

The starving animals were seen by a German who lives near by. He took photographs of a number of the farm’s 250 lions and passed the pictures to the National Society for the Prevention of Cruelty to Animals, which sent inspectors to investigate the farm in the northern province of Limpopo.

“The lions were not receiving enough to eat and fights have been breaking out in the prides as they compete for food,” Isabel Wentzel, manager of the NSPCA’s wildlife protection unit, said. “The stronger lions were in a better condition but the weaker lions were not getting any food.”

Lion feeding is an expensive business with a constant supply of donkey meat, rejected game carcasses, chickens or dead livestock from neighbouring farms needed to feed the animals.

In the wild, lions hunt every two to three days, eating on average 5kg to 7kg of meat a day. Hunting companies charge about £19,000 to shoot a lion in South Africa.

The owner of the game farm told the NSPCA inspectors that he had been ill and that his staff had neglected to feed the lions, Ms Wentzel said.

“He said he had fallen ill and his staff weren’t trained properly, but that is no excuse,” she said. “He should make sure his staff are trained to handle lions.”

Captive lion hunting is legal in South Africa, with its supporters claiming that it plays an important role in bringing in money that is then used for wildlife conservation.

Ms Wentzel said that hunting companies had to meet many strict conditions before they were given permits for lion hunts.

Lions, for example, are not allowed to be tranquillised, may not be shot in front of other captive lions and have to be kept in an enclosure that is of a certain size.

It is extremely difficult to enforce the regulations and the authorities have to rely on whistleblowers to expose the offenders. Dr Andrew Venter, who produced the documentary Blood Lions that exposed abuses in lion breeding and hunting in South Africa, said that up until last year more than 900 lions were hunted in the country each year, with 99 per cent “bred for the bullet”.

A year ago there was a turning point for the industry when the Professional Hunters Association banned its members from hunting captive bred lions.

“Since then we have seen an enormous drop of around 70 per cent in the demand to shoot captive lions,” Dr Venter said.

“The owner of the hunting operation in Alldays may not be earning the massive income he once was and is possibly running short of money. If the lions were the valuable asset to them that they once were, he would be making sure they are in prime condition, whether he is ill or not.”

The owner has been warned to build up the strength of the lions before they are sent out to be hunted or face the closure of his farm.

The NSPCA said that it would be paying frequent visits to the farm to check on the animals.

Last year more than 20 Belgian and Dutch hunters paid to shoot hundreds of baboons, warthogs and antelope on another farm outside Alldays where wildlife was shepherded directly past them.

That hunt came months after the global furore over the shooting of Cecil, a lion in Zimbabwe.

The death of Cecil, who was being tracked by the University of Oxford as part of a research project, created such outrage that the hunter, Walter Palmer, a dentist from Minnesota, was forced into hiding.