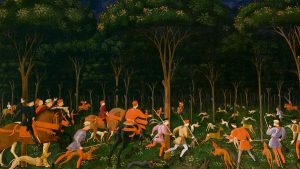 Hunting with hounds and bull fighting are the two surviving (just) European rituals that define man’s historic relationship with the animal world. It is not a comfortable relationship, but since it involves death, nor should it be. The only honest point of view is that you should not eat an animal you would not be prepared to kill yourself. Few of us can live up to that principle.

Hunting was an important cultural and recreational activity for country people of all classes, and echoes to this day huge differences in cultural attitude between the British “maritime” and the continental “land-locked” psychology. The hunting so vividly celebrated in the chorus from Carl Maria von Weber’s opera Der Freischütz took place exclusively in deep forests. That is why continental hunting developed the sophisticated system of horn calls, which have been richly exploited in classical music. To this day, every French hunt is distinguished by its own unique fanfare.

British hunting, by contrast, takes place over open country and is about speed and distance. The introspective, landlocked society hunted in the darkness of the forests, the wide-reaching maritime one gallops across open countryside. That is why the British hunting horn is an unsophisticated one-note affair — though thrilling when “doubled” to indicate that the quarry has “gone away” — ie left cover for open country.
The OAE performs Der Freischütz, with text and translation by David Pountney, at the Festival Hall, London, on June 7
The Hunt in the Forest, Paolo Uccello, pictured above
Uccello’s charming image uses Renaissance perspective to show hounds and hunters gradually disappearing into the darkness of the forest. The sombre scene is made even more mysterious by the fact that this hunt appears to be taking place by night.

The Finest View in Europe, Snaffles
Snaffles was the nickname of Charles Johnson Payne, who specialised in sporting and military images, often humorous. This image, from the point of view of the rider looking out over the fields, was paired with another picture titled The Worst View in Europe,which shows the rider approaching one of the most daunting fences in the Grand National.

Tristan und Isolde, Richard Wagner
In Act II of the opera Isolde is waiting for her illicit tryst with Tristan, and she and her servant anxiously listen to the horns of the departing hunt. The six horns start out with brazen, brilliant fanfares, and gradually recede until we arrive at an absolutely magical effect in which they become an indecipherable murmur in the strings.

The death of Actaeon, Titian
For those who are angered by hunting, this image provides the satisfaction of seeing the hunter hunted. Actaeon, after a particularly successful and bloody day’s hunting is returning home when, by accident, he stumbles on the place where Diana is bathing naked. She is so enraged by this violation that she turns him into a stag and he is ripped to death by his own hounds.

Otter Hunt linocut, Sybil Andrews
Andrews was a very distinguished British artist of the 1930s who made a speciality of capturing dynamic movement in her favoured medium — the lino cut — usually, like the Italian futurists, in a conspicuously contemporary location, such as the London Underground. Here the otter has escaped Actaeon’s fate by finding safety in the roots of a tree.

Diana and a Hound, Paul Manship
An image focusing on supreme elegance of movement, perhaps at the expense of logic. It is not clear why she and the hound are moving in one direction, but looking over their shoulder as if they are being hunted — but they look superb doing it!