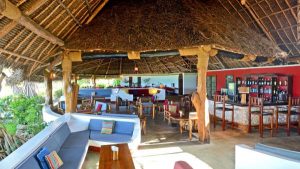 ‘Accidental’ designer Terry O’Driscoll fell into the interiors business during self-builds — one of which is now for sale. It’s a journey that has taken him from Cork to Zanzibar and back

In 2012, Cork man Terry O’Driscoll found himself on a building site in Zanzibar, surrounded by men digging out foundations with picks while women took the rubble away in buckets on their heads.

O’Driscoll, an interior designer and decorator, had been drafted in to help develop four sea view suites at the Pongwe Beach hotel, a boutique guesthouse on the archipelago, off the coast of Tanzania, East Africa on the shores of the Indian Ocean.

A regular visitor to the hotel, he was there in 2011 when the owner, Englishman Val Preston, saw some of his design work.

“Val had bought a piece of land, put a pool on it and was interested in what else I would put there,” says O’Driscoll. “We discussed ideas, then he asked me to go to the UK and present it to him formally.”

O’Driscoll secured the job, the rooms were built, and he subsequently got involved in upgrading the hotel’s restaurant and bar. “Val then asked me to do it [renovations] every year. I go back at a very nice time of the year when it’s open and see what we can do. Then I return for closed season when we physically do the building. It closes for seven or eight weeks, depending on how much we’re doing.

“This year we built a lounge area down at the pool. Every year all the rooms are painted and all the doors come down and are varnished. You have to keep the integrity of the hotel; you don’t want to spoil it and get it too big. It’s 20 bedrooms and that is it, but you make it better every year.”

Working in a far-flung country has had its challenges. When O’Driscoll was completing the suites, housekeeping staff wanted to wash the curtains before they were hung. He explained that they should not be put on a hot wash, but the language barrier stood in the way, they did exactly that. The curtains shrank by 18in. “It was easily sorted. We quickly rustled up a contrasting band and put it along the bottom, which ended up looking great.”

Keeping the integrity of the hotel also means respecting the local culture rather than trying to bring a piece of West Cork to Africa. “When we did the four rooms, I designed all the furniture as well and had it all made on the island. The main door into each room is a proper Zanzibar door — beautiful big arches and carving. Val’s very strict on trying to keep it as Zanzibari as we can.”

O’Driscoll is something of an accidental interior designer. His first big project involved designing and building his own house 12 years ago. “I’d always been interested in interior design but I didn’t have any background in building or qualifications at the time,” he explains.

To get the planners on board, he brought them to his site and explained his vision of creating a house in the traditional farmhouse style. “They let me draw it until they were happy with it and I then got an engineer to put in the plans,” he says. Those plans were approved and the end result was featured on the cover of Homes, Interiors and Living magazine, while Dulux used a couple of the rooms to showcase its paint range.

“People started turning up at the gate,” says O’Driscoll. “There was a supplier list with the magazine feature and people were ringing me asking me to do work for them.”

Spurred on by this, he decided to do a correspondence course in interior design in the UK, then set up Peninsula Life and Design from his base in West Cork.

A few years later, O’Driscoll embarked on a second self-build project, this time a 195 sq metre single-storey home on a 1.65 acre site in Toormore, between Schull and Goleen. The Lake House, which sits on the edge of a reclaimed lake, consists of what are essentially two lean-tos, giving it both a modern and long-established appearance. “I did try to keep it some way traditional looking,” he says.

The design process involved consulting with the planning authority once again. “I drew all of it and they didn’t change anything. They verbally agreed it and then the engineer copied it and we submitted it to planning and it was all fine.”

The house, which was built by the same team that had worked on the first project, including O’Driscoll’s cousin as the main contractor, also featured in a number of UK and Irish interiors magazines.

It is now on the market with a price tag of €695,000 through agents Charles McCarthy. O’Driscoll is looking to move on to the next adventure. “I love it, but I’d quite like an old farmhouse that maybe needs a bit of work.”

His approach to design is all about simplicity, functionality and maintaining the integrity of the location. Residential work ranges from paint consultancy to designs for new builds. “A lot of people come to me with their plans before building,” he says. “It’s about going over them and making sure that it all works.”

Although he works on private residential projects, O’Driscoll also has a large number of commercial clients in Ireland. Jobs have included the interior design of the bar and nightclub at the Bantry Bay hotel, the design of the Relish Bistro and an upgrade of Westlodge hotel in Bantry, where he developed a design for the refurbishment of 40 bedrooms and worked on plans for the hotel’s reception area, leisure centre, dining room, bars and restaurants.

Three years ago, he partnered with Lorraine and John Delaney of Embellish Home Interiors in Skibbereen and he now offers a consultation service from their shop on Saturdays. “A lot of people have reservations about getting somebody in and this is a nice way of being able to do it,” he says. There’s a “small” fee for the service, depending on the length of the consultation, and this is then redeemable against purchases in the shop.

It was at Embellish Home Interiors last October that he met Sharon Poulter, owner of The Castle, a 12-bedroom boutique B&B in Castletownshend. Poulter hired him to help her refurbish the 17th century castle, which has been in her partner Justin Cochrane’s family since 1649. It was a very different project to the hotel in Zanzibar.

“Sharon had a strong idea of what she wanted, but there was a lot to do so I was brought in to help,” says O’Driscoll. “We painted the walls using a palette of five different colours, recycled where we could and reupholstered. She was great to work with.”

For O’Driscoll, functionality is a key element of good design, whether it’s developing luxurious new hotel suites in East Africa or upgrading a 17th century castle in Ireland. “Whether it’s a home or a commercial business, it needs to function well and be easily maintained,” he says. “It should be easy. If it’s a house, you want it to look great without it being hard work to make it look great. With a commercial premises, it needs to look great but be hard wearing and durable.”

His advice to anyone thinking of giving their home or business premises a makeover is, unsurprisingly, to get in an interior designer. “If you do get professional help, it stops mistakes being made. What you spend on getting somebody professional in to give you a hand, you should hopefully save yourself.”