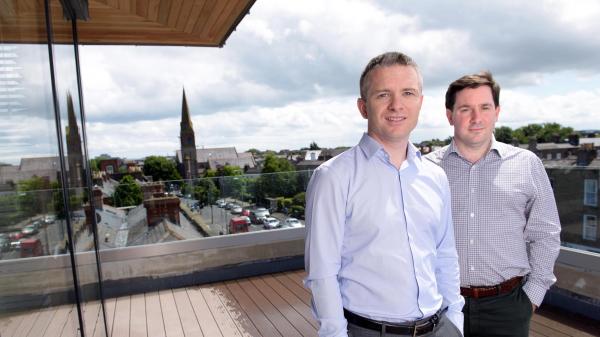 Not put off by limited room to manoeuvre, some developers are on an upward trajectory

What do you do when you don’t have the space to build out? You build up, of course. A new trend is emerging in the Dublin property market, with developers eager to maximise on the growing demand for residential and office accommodation building on top of existing structures.

One of the latest examples is the old National Irish Bank building at Nos 98-100 South Circular Road in Dublin 8, where developer Ronan Brady has added a fourth floor — and four luxury apartments — to the three-storey structure.

When Brady bought the redbrick 1960s building in early 2014, the ground floor was occupied by Tesco Express, on a 25-year lease, but the upper levels were vacant. He had no intention of breaking the lease and knocking the whole building down — it’s made of thick concrete. He also wanted to maintain a deal with Vodafone and Three to store their aerials on the roof. Building up was a much more viable option, and constructing luxury apartments with a view to renting them out in an area that is becoming increasingly gentrified was a no-brainer.

Brady brought in architect Adrian Hill to create something special. The pair had worked on previous in-fill developments together in Malahide and Palmerstown, and Hill’s signature work is modern and creative. The Dublin-based architect says the biggest challenge was the building itself. “It was like a grown-up game of snakes and ladders. Everywhere you went there was a challenge, so you ended up having to go back to go forward — to get around the structure and services. Every apartment is different because we couldn’t make the layouts the same. The building didn’t allow us to do that. But we had a good team on board, great clients and great builders, so it worked.”

The first obstacle was the issue of planning. Office buildings from the 1960s have notoriously low ceilings. Dublin city council’s standards for residential design in 2014 were quite onerous, though they have been relaxed since.

“We started off wanting to create six apartments but were told that we wouldn’t get planning,” says Hill. “Paul Kearns, senior planner with Dublin city council, is a really good planner. He was looking at the building and thinking ‘How can we get to this to work?’ rather than thinking ‘How can I refuse them?’ ”

Brady adds: “He is very passionate about living in the city and quality of space.”

After going back and forth with Kearns, the pair decided to construct four apartments — one single-storey apartment on the first floor with three duplex apartments above, adding a fourth storey to create the upper level.

“We really had to work with the building to try and give as much to each apartment as we could,” says Hill.

When the proposals were eventually brought in front of the planning department, there were no objections. Brady had sat down with Tesco early on in the process, and the retailers were fully behind the construction project. The development was granted a straight, clean planning permission. Construction started in January, with Mannings as the contractor, and was completed last week — ahead of schedule.

“We built a timber-frame structure, so it was craned up. Tesco suffered disruption with the car park because we had to renew all the drainage on the site. That was the disruption, not building on the roof. And turnover wasn’t down,” says Brady.

Before construction started there was unsightly mesh around the top of the building to prevent bricks from falling off. The facade was ugly so Hill set out to create something more aesthetically appealing — using wooden overhangs, extensive use of zinc and glazing — and the results are impressive. The apartments all face due south, and have large private outdoor terraces with unimpeded views over Dublin 8 as far as the Dublin Mountains.

“When I went up to the roof the first time I viewed the building, I thought this was something special,” says Brady, whose main business is wholesale distribution but who has been building in-fill developments since 2010.

Even the one-storey apartment at first-floor level is pretty impressive. The two-bedroom unit is allotted a very generous 111 sq m. It opens into a roomy hall that could be used as a large home office. The two double bedrooms lie to the back of the building, while to the front is a large open-plan sitting room and kitchen, with a separate utility room behind.

The road outside is busy with traffic throughout the day but the noise is virtually inaudible thanks to Danish glazing — and those solid brick walls. Doors open out to a long terrace with a recessed, roofed terrace providing extra privacy. “Often you see terraces fixed to the outside of buildings that nobody uses save for bicycles and washing. By taking a bit of the building and creating a sheltered terrace, it creates a space that people will use,” says Hill.

If apartment developers have a reputation for shoebox living, this development is the antithesis of that. The storage space in each unit puts Celtic tiger houses, never mind apartments, to shame. In the one-storey apartment, there is 17 sq m of storage space, as well as the utility room. On the return level, three former gents lavatories have been transformed into three small store rooms — where the duplex dwellers can hide away buggies, golf clubs, skis and other bulky items.

What was originally the top floor of the building was given over to an open-plan office and a kitchenette. It is now the bottom floor of the spanking new duplexes. The units have an upside-down orientation — with bedrooms, bathrooms, laundry rooms and storage space on the lower level and open-plan kitchens and living spaces above. They range in size from 130 to 145 sq m, and each has been designed differently.

The end units have a study and walk-in wardrobe. All of the bedrooms are good-sized doubles. The bathrooms are large, with baths and showers. The apartments will come fitted out with everything from sofas to the kitchen sink, with kitchen design by QK Living in Walkinstown, Dublin.

The existing ceilings fell short of the council’s development plan standards — 2.4 metres compared to 2.7 metres — but Hill won planning approval by compensating with the ceilings in the new floor above. The top level, which is stepped back from the front of the building, provides wow factor, with bright open-plan spaces and three-metre-high ceilings.

Up here, the views get better. From the duplex apartment terraces, ample and also with recessed areas, you can see most of the city — from one apartment you can see as far as Heuston South Quarter, from the opposing end you can see as far as the docks, and from each you have clear views of the Dublin mountains. Smoked glazing in the living spaces provides privacy from flats to the rear of the building.

South Circular Road’s star is on the rise. Cafes on the strip include Little Bird, a cafe and yoga centre, and Nelly’s . There’s a new restaurant, Bastible, across the road, and a French bakery around the corner, Gaillot et Gray, There are more new cafes to be found on Clanbrassil Street, and the former Garda Club on Harrington Street is being converted in to a FlyeFit 24-hour gym.

“You’re 700 metres from the Luas stop down the road, within walking distance of Camden and Wexford Street. You have everything in the area,” says Brady.

Nos 98-100 are surrounded by beautiful period homes, and both Hill and Brady say they were conscious of this in their design.

“The whole thing is sensitive in its design, we stepped back the top level so you can’t see it from the ground,” says Hill.

“Ronan spent extra on the smoked glazing in the terraces to make sure they looked attractive. We’ve planted a laurel hedge to the left of the shop, and had smart granite-paved curtilage added. This was a building that nobody wanted, was empty and vacant. You can actually do things with these buildings.”

The apartments, available to let through estate agent Owen Reilly, also have car parking to the rear of the building. Monthly rents will range from a reasonable €2,200 for the two-bed apartment to €3,000 for the duplexes. They will be ideal for professionals wanting access to the city centre and a home in an up-and-coming area. Expect them to be snapped up quickly.
The lowdown
What it is: Three duplexes and one apartment, available to rent
Where it is: At Nos 98-100 South Circular Road, above the Tesco Express, so it will be handy for those hangover breakfasts. If you want to go upmarket, get dressed and visit one of the many new cafes nearby.
Who it will appeal to: Professionals and mature students should apply.
How much it costs: €2,200 a month for the two-bed apartment and up to €3,000 a month for the three-bedroom duplexes, not bad if you’re three professionals sharing. You’d pay as much for a shoebox in the city.
The selling point: These are high-end apartments, with parking, storage, views to die for, and all in a central location.
The agent: owenreilly.ie