As homeowners embrace originality, authenticity and quality. We find the best of British craft 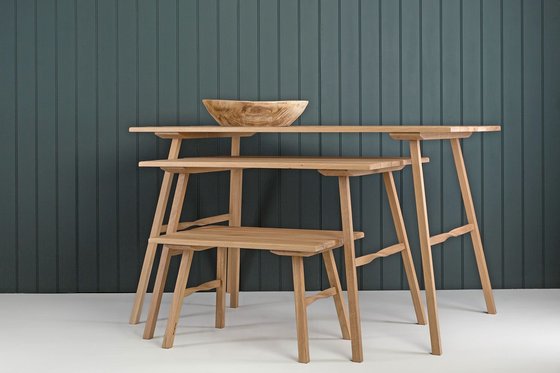 Craft has been reinvented, its status transformed from wholesome to hot. Handmade’s natural habitat is no longer school fetes and souvenir shops; it now lies at the heart of the luxury market, with brands from Mulberry to Savoir Beds trumpeting the traditional skills of their makers. A survey commissioned by the Crafts Council, called Measuring the Craft Economy, shows that the annual value of Britain’s current 11,620 craft-based businesses is £746m and, widening the (handwoven) net to catch craft skills practised in all businesses, the value of craft to the economy was estimated at £3.4bn. That’s far from small fry.

As homeowners, we’ve woken up to the joy of owning original handmade rugs, tiles and tableware. But finding great makers has always been a hit-and-miss affair. Some 88% of the nation’s artisans are sole traders, tucked away in workshops from the Lake District to the Lizard. Their profile tends to come via word of mouth, and discovering them involves determination — leading most of us to fall back on high-street homewares. “We’ve been working hard to push the value of the sector, its economic value and contribution to society, but craft has traditionally been more of a hidden interest,” says Rosy Greenlees, executive director of the Crafts Council. What is long overdue is a little black book of the country’s leading crafters. So, this month, Greenlees is supplying just that, with the Crafts Council launching a nationwide directory at craftscouncil.org.uk/directory.

About 300 artisans, all vetted and approved by CC teams, are already online, and there should be 1,000 by the end of the year. Members are currently searchable by disciplines, materials and price range. “We will have a map that will show hotspots of talent and a way of searching for products of recent graduates,” Greenlees says. Thanks to the directory, craft fans will be able to identify makers within a defined radius of an address, and travelling around Britain could involve delightful shopping stops to meet a studio potter or cabinet-maker, pick up an impulse buy or discuss a special commission.

When did the new craving for craft begin? Greenlees says that, post-austerity, “people are re-evaluating what they buy. They’re interested in who made it and how, and where the materials came from. They want to own objects with integrity — that’s led to an interest in making.” Sue Herdman, editor of the recently relaunched 45-year-old Ceramic Review magazine, paints a similar picture of interest on the increase, especially among younger buyers. “Figures such as Grayson Perry have made us look at craft and the handmade in a fresh way,” she says. Add to the Perry effect the current popularity among twenty- and thirtysomethings of magazines such as Mollie Makes and The Simple Things, and the emergence of craft ceramics in fashion stores from Tory Burch to Nicole Farhi and Calvin Klein, and Herdman reckons that craft is officially cool.

Our fascination with making goes deeper than fashion. We have become disconnected from the way household furnishings are produced, and — just as we want to hear about the way our favourite cheese is made, and know where our tomatoes are grown — we are eager to reconnect with the processes and materials behind our interiors.

“Seeing what goes into making furniture and having the opportunity to talk to makers is really captivating to the customers,” says Carmel Allen, creative director of Heal’s. Allen has been weaving more craft into the store’s offering over the past couple of years, instituting an annual Modern Craft Market, and the Great Heal’s Bodging Race.

The Race involves six designer-makers competing over a week, in February, to create an original piece of furniture using traditional craft techniques. Allen calls it retail theatre, and it has proved consumer catnip. “We found there’s a new curiosity about making,” she says. “People stand at the windows, filming. Chris Eckersley had people coming in and asking him, ‘Is this how you make a chair then?’ As if chairs only came flatpacked.”

However, the most significant shift in perception, the factor that lends craft its economic va va voom, is that craft is now viewed as a component of luxury. Guy Salter is one of the key figures behind this change. A luxury specialist whose CV includes a spell as CEO with Asprey, Salter set up Walpole Crafted eight years ago, a mentoring programme “with the aim to help very talented craftsmen with their businesses”.

“At that time, I felt the luxury brands were storing up trouble because, although they talked the talk, making and quality was sliding down the scale of importance for them. I thought we should do something about it,” he says. This month Salter launches London Craft Week (from Wednesday until next Sunday), which he predicts will be as big as London fashion week in years to come. “Now, as it was in the Arts and Crafts movement, making is being talked about more, and becoming more fundamental. I thought, why is there not a week where craftsmanship has its moment in the sun, just like fashion and contemporary art do?”

He adds: “I want to take those buyers who have got used to buying from the luxury brands, but lost the confidence to commission things and lost the understanding of what true bespoke is. I want to offer them places they can find exceptional craftsmanship.”

What’s on at London Craft Week

With everything from rattan-weaving demos to arty craft sales from international galleries, the inaugural London Craft Week promises to be an unprecedented showcase for making.

Made of Mayfair, the New Craftsmen
Seven makers took a walk through Mayfair and produced pieces that reflect the architecture and history of the area. Retrace their steps. Tue-June 13; thenewcraftsmen.com

Cockpit Arts Open Studios at Holborn
Visit 170 of the foremost makers, including Billy Lloyd and Fanny Shorter, in their workshops. Fri-Sun; cockpitarts.com

The Crafted City
Contemporary Applied Arts has built a pavilion at its Bankside location, covered in blue and white tin-glazed ceramic tiles made by Daphne Carnegy. With works by a dozen local makers, including the glass-blowers Stewart Hearn and Michael Ruh. Thu-Sun;caa.org.uk

Made in Clerkenwell: Summer Open Studios at Craft Central
Explore the East End’s craft community with a range of events in the two Victorian buildings that house the studios of more than 100 makers, including the ceramicist Ikuko Iwamoto. Ptolemy Mann’s talk on ikat dyeing promises to be a highlight. Thu-Sun; craftcentral.org.uk