HOW I MADE IT: Peter Flanagan, Co-founder of Flanagan Kerins 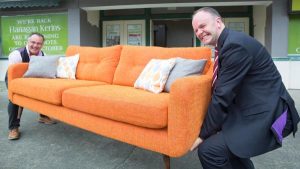 Peter Flanagan, dealt a sucker punch by the recession, has come back swinging.

The family’s furniture manufacturing business was set up by his father James in 1946, near the family home in Buncrana, Co Donegal. By the 1980s, when the second generation of the family was at the helm, it expanded to a second store in Dublin’s Mount Merrion.

Best known as a retailer of solid, upmarket furniture and restored antiques, in the early days it did a strong line in army surplus furniture. “We’d be on a tender list from the UK and US armed forces, and every now and then we’d bring in a 40ft container,” he said. “It was mostly desks, simple, solid and built to last. You still see a lot of them around, stamped WD for War Department.”

One tender, in the 1980s, involved the closure of a US army base in Berlin. “The document was pages and pages long but what struck me most was that they needed the goods all gone within 10 days. This wasn’t about price, it was about speed.”

His bid of $1,100 (€980) won: “I reckoned anyone else who had twigged would offer $1,000.” He flew to Germany, drove to a village north of Bremen and found “gymnasium halls” stuffed with residential furniture meant for the homes of troops stationed abroad, many untouched.

The lot filled 20 40ft container loads. He packed them up, shipped them home and sold them off over the next decade for about €500,000.

“It certainly helped get us through the recession of the 1980s,” he said.

Having grown steadily during the 1990s, in the boom years of the Celtic tiger, he and his brother Brian began expanding in earnest. New stores were opened in Bray, Naas and Sligo. The company also had three premises in Buncrana: a retail store, a warehouse and a workshop for restoration work.

When Fruit of the Loom pulled out of Buncrana, the brothers, who had long since succeeded their father in running the business, saw an opportunity. “The idea was to buy that premises, consolidate all our local operations and sell off our two premises in the town to pay for it.”

This time around he was not so lucky. “The planning took too long and, by the time it came through, the market had turned.” Having spent €1.5m to buy the new premises and more to renovate it, they were “too highly leveraged when the tide turned”, he said.

In hindsight the brothers probably should have closed the factory. “The family ethos had always been to employ as many people as possible but we were rowing against the tide because everyone else was bringing goods in from the Far East,” said Flanagan. “We have a very good eye for quality and for the market, but the detail and discipline of running a factory is very hard.

“We sought to be very vertically integrated, from design to manufacturing and retailing. It’s really very hard to be good at all three.”

The Celtic tiger years encouraged the company to take risks. “We were building the business for the third generation,” said Flanagan.

“We wanted to put in place an infrastructure where we produced everything under one roof in Buncrana for a chain of shops around the country. On paper it looked great but it was the cart driving the horse because we weren’t sufficiently market-led.”

When the downturn hit, they did not respond quickly enough. “At our peak we were employing 70 people, including many locals in Buncrana. It’s hard to start talking about letting people go when you know them that well. So we took successive rounds of pay cuts and tried to get through that way.” Cash flow dried up, payments were missed and, in November 2011, Revenue pulled the plug. Having lost his mother in April of the same year, it was Flanagan’s annus horribilis. “I’m an optimist by nature and so I fought tooth and nail, thinking I could save it,” he said. “So it was only when the doors closed that I felt, what do I do now?”

A strong faith helped, he said, as did the support of his wife Yvonne, who went back to work as a nurse. “We couldn’t afford to pay the mortgage.”

Selling furniture was all he had known since childhood. Within weeks he called former employee and “right-hand man” Damian Kerins. “I told him, we need to put food on the table — would you like to start a small business?” Using borrowings from their extended family, they did a deal with their former landlord in Bray for a stepped-payment rent. By February 2012, with the support of suppliers, they were back in business.

Now in his early sixties, it was hard work. “We bought a second-hand van from DoneDeal and sold by day and delivered by night,” he said. “But the business became fun again. For the previous three years I had done nothing but firefight, negotiate with banks, with Revenue, with staff. Here I was just working. It was exhausting but good.”

Going into liquidation meant some customers had lost deposits for goods they never received. To compensate these customers, he offered discounts on new stock. By and large, the partners benefited from the goodwill built up over the previous decades. “Having a good reputation was always important to us,” he said. “It always is when it’s your name over the door.”

And this year is turning into an annus mirabilis, with the personal guarantees of the previous business finally resolved and a deal done on his mortgage. Sales are growing in Bray, to a turnover of €1.5m last year — “and no debt”.

Next month sees Flanagan Kerins open in the old Flanagans of Mount Merrion premises. Seized by the bank and sold to a property developer, Flanagan approached the new owner with a request to open an extended pop-up shop. In the end he signed a deal that will see him stay there for “several years”.