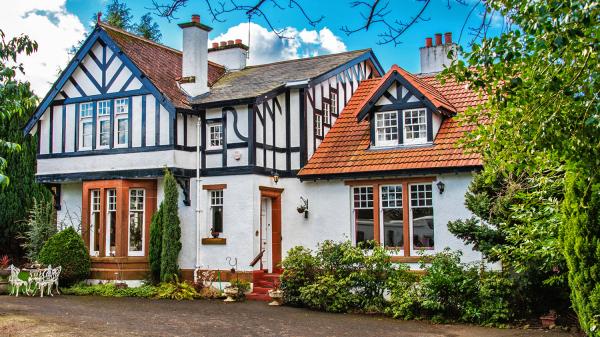 They are instantly recognisable thanks to their eccentric details, such as belltowers, beamed ceilings and ornate chimney breasts.

However, the appeal of an Arts and Crafts house runs deeper than aesthetic charm. Scottish architects and artists were significant figures in the movement, and their legacy — distinctive homes with well-designed layouts, enjoyable outside spaces and idiosyncratic interiors — remains to this day.

Charles Rennie Mackintosh is perhaps the most familiar face involved with Arts and Crafts in Scotland, but other Scottish architects, such as George Walton and Alexander Paterson, and artists such as Margaret MacDonald and Jessie King, helped to create iconic properties in the late 1800s and early 1900s.

Thirty years earlier, the movement was beginning to gather pace in England. In part a rebellion against mass-produced items that were unconcerned with quality, it sought to bring back handmade elements to design. Red House, an Arts and Crafts house in Bexleyheath, southeast London, was the home of the artist William Morris, who said: “Have nothing in your houses that you do not know to be useful, or believe to be beautiful.”

Red House is now owned by the National Trust, the red-brick property has a steep Escher-esque roof made of elaborate interconnecting sections, with numerous chimneys and stepped gables. Each of its windows is dependent on the shape of the room, rather than subscribing to a homogenous style. It also features furniture chosen by Morris and designed by him and his contemporaries to suit the space — something else in keeping with Arts and Crafts in the UK.

In Scotland, leading architects were quick to adopt the style. Christopher Dresser and William Leiper, who were born in Glasgow, began to design early Arts and Crafts houses in the west of Scotland from the 1860s to 1880s, particularly in Helensburgh — at the time an enclave for wealthy traders. Leiper, who was responsible for the striking Templeton Carpet Factory on Glasgow Green, borrowed ideas from Anglo-Japanese interiors to feature in his homes, such as Cairndhu, a property in Helensburgh with a gold ceiling. Dark wood, simplistic shapes, lead windows and high, pitched roofs are also mainstays of his work.

Although Mackintosh’s era succeeds Leiper’s, the pair’s careers overlapped. Houses built by Mackintosh, or to his designs, carried many of the hallmarks of Leiper but were also, in their own way, art nouveau. Windyhill House, which Mackintosh was commissioned to build in 1900 and is on the market with Ballantynes for £3 million, is as desirable as it is intimidating. It features Japanese-inspired furniture and restored original light fittings and stained-glass windows. Described as “Mackintosh’s first essay into the room as a work of art”, it is more of a museum than a home. Perhaps that is why, after two years on the open market, it is still seeking a new owner.

For all their quirks and charming foibles, there can be issues with living in an Arts and Crafts house — or those that employ their design credentials. Some find the panelling and decorative details oppressive and the rooms dark.

Others have had only good experiences with the craftsmanship of their homes. Julie and Gavin McCallum bought their 1930s Arts and Crafts-style property in 2001 and, although they were initially hesitant about some of its attributes such as small windows at the front, it was apparent that their home’s configuration solved this issue.

“We didn’t really know what Arts and Crafts was when we started looking for a property about five years ago,” Julie says. “We were actually looking for a blond sandstone house, and from the outside we weren’t sure we liked the house at first because it was a quirky shape and had smaller windows. What struck us when we walked into the house is that it was such a clever layout.

“All the big windows were at the back of the property so all the public rooms got lots of light, and the rooms with the little windows were spaces like the cloakroom that didn’t matter so much. Although I thought I wanted a sandstone property, when we visited a couple of them, the ceilings were so high that they felt quite cold and we wondered if we could ever make it homely. That wasn’t an issue here.”

Their four-bedroom property in Ralston Road, Bearsden, which is for sale through Rettie for offers of more than £1.05 million, has also been home to the McCallums’ three children, aged three, seven and eight. Although the house features a lot of wood in the flooring, panelling and original fireplaces, it is a material that has proved surprisingly child-friendly, as has the rest of the house.

“We have had parties with people wearing high heels and we have brought up three children here and the wood is super hard-wearing,” Julie says. “It really does stand the test of time as we have not been precious about it.

“The house also flows really well. There is a family room that connects off the kitchen so you can keep an eye on the kids when cooking, and two of the public rooms have french doors so it’s possible to access the garden easily.”

While some homeowners can find the amount of dark wood in Arts and Crafts homes gloomy, the McCallums have been mindful of this in their approach to decoration.

“There is a lot of dark wood, but we decided to paint the ceiling beams white in the family room as there was a lot of wood around the fireplace as well,” says Julie. “I like the idea of having that contrast with the atmospheric hall.”

Graeme and Fiona Thomson bought Drum Millig, an Arts and Crafts villa in Helensburgh built in 1909 by Alexander Paterson, who worked at the same time as Mackintosh, in 1996. Now on the market with Savills for offers of more than £795,000, it has six bedrooms and a handy annexe. Like the McCallums, they were attracted by the well-proportioned rooms of the property, that felt large enough for their family but still intimate.

“There are a number of Arts and Crafts homes in Helensburgh and some of their rooms are enormous,” says Graeme. “They’ve got what I call the Christmas cake icing-type cornicing around the ceilings. The beauty of Drum Millig is that the rooms are larger than standard homes, but they don’t have those huge Victorian ceilings. The cornicing here is easy to maintain.

“There is African walnut wooden panelling in the hall, which gives a sense of warmth, and the staircase is also made of natural wood. We have only needed to oil it once or twice in 20 years. There are no hallmarks from our children, who have all since left home.”

Maintenance of an Arts and Crafts property is important. Windows — of which there are about 70 in Drum Millig — will need to be replaced or upgraded throughout their lifetime and wood found elsewhere will need care, although perhaps not as much as you might think. The Thomsons suggest finding a tradesperson who is adept at dealing with Arts and Crafts properties.

“Something else to consider is keeping an ambient temperature in the house,” Graeme says. “When we first moved in we noticed that if we turned the heating off completely in the summer and went away on holiday the wood expanded and contracted. By keeping a low steady temperature, maintenance of the wood was not as onerous.

“We haven’t done anything radical to Drum Millig. We wouldn’t want to, as we see it as one property. There is scope for someone to carve it up, but it wouldn’t be us who would do that.

“People who buy these sorts of properties tend to be fully aware of their differences compared to other homes. Fiona and I have lived in the town most of our lives so we have come to know good tradespeople. It’s important to identify someone who is experienced with older houses.”