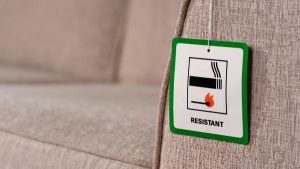 Lives are being needlessly put at risk because the official government fire test to guarantee the safety of millions of items of household furniture does not work, a whistleblower claims.

Terry Edge, a former civil servant who led an official review into fire safety, said he found consumers were misled because a “match resistant” test used for soft furniture is ineffective.

“It’s scandalous that the government knows the match test does not work and consumers are being misled into believing their furniture is fire-resistant. I consider lives are being lost,” he said.

Edge claimed that a new test recommended in a government consultation after his review would have led to better-designed furniture and reduced the use of chemical flame retardants that may have a possible adverse effect on health and the environment.

The proposal has still to be implemented after the flame-retardant industry lobbied against changes that could have cost it millions of pounds because of the reduced use of chemicals in soft furnishings.

Ikea, which has banned the use of some flame retardants, wrote to the Department for Business, Energy and Industrial Strategy (BEIS) earlier this year urging it to scrap the discredited test.

A rise in fire deaths in the 1960s and 1970s was attributed to the popularity of foam-filled furniture that caught alight quickly and emitted toxic gases in a blaze. The 1988 Furniture and Furnishings (Fire Safety) Regulations, which included the match test, have been credited with a decline in fire deaths. There were 263 fire fatalities in 2014-15.

Edge led a review of the rules and a consultation paper that was published in 2014. He then launched an unsuccessful whistleblower case against the government, claiming adoption of the review’s recommendations was being unduly delayed.

Edge also said that the match test conducted on fabric at a testing house did not accurately replicate the finished product, which was often more flammable.

He claimed there are about 50 deaths a year from items covered by the regulations and thinks some could be avoided with a more effective test.

Some retailers and fire safety experts said more work was required on the replacement test. Edge said: “There is no good reason for the delay.”

The BEIS said there is no evidence that any furniture is unsafe under current regulations and that fires and deaths involving furniture are falling: “We are developing new regulations to keep pace with changes to design, manufacture and consumer tastes. We will publish these proposals in full shortly.”

The Furniture Industry Research Association said government research estimated that the 1988 fire rules had saved 54 lives a year. It said the match test was an “effective predictor” of the fire performance of most fabrics.